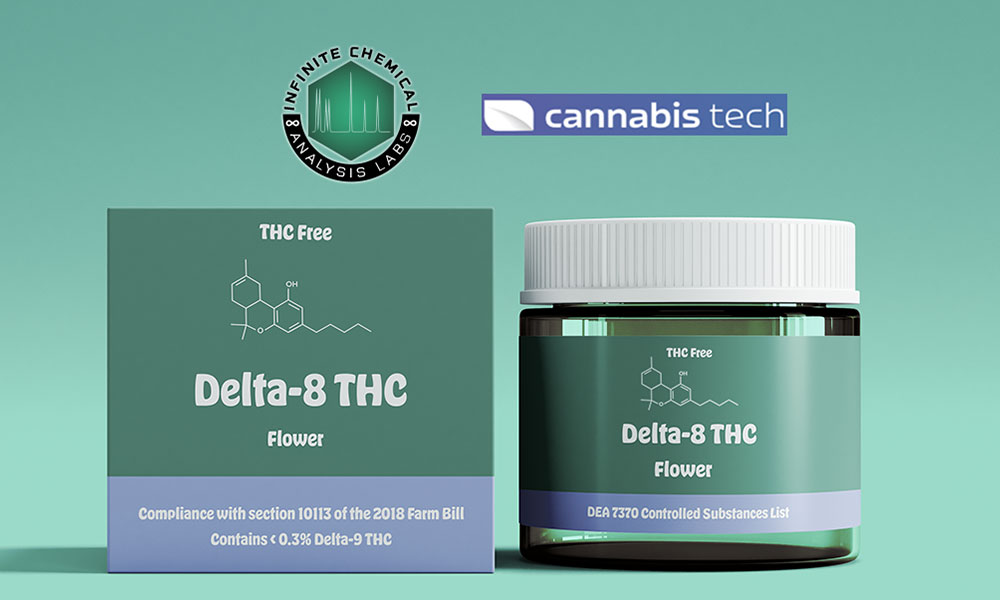 Waving the Caution Flag on the Race for Delta-8 THC

Delta-8 THC is a hot new buzzword, but many are concerned about manufacturing processes, mislabeling, and misleading marketing.

Consumables containing Delta-8 Tetrahydrocannabinol have become ubiquitous on the marketplace and are touted as safe by producers and vendors alike. Companies are making their Delta-8 isolates using numerous methods, some including the introduction of heavy metals. Without regulation or third-party testing, how can we be sure how safe these products are?

Josh Swider’s drive to achieve a greater understanding of science chased him through his education, where his interest in the medicinal properties and benefits of cannabis deepened. Perplexed by the lack of analytical research, public understanding of the products, and information arriving to the market, Swider and fellow chemist, David Marelius, co-founded Infinite Chemical Analysis Labs, or Infinite CAL, in 2016. Since its inception, it has been Infinite CAL’s mission “to provide the cannabis industry with accurate and timely analytical services of the highest quality, while meeting or exceeding their clients’ expectations.”

IS CBD BEING SYNTHESIZED OR CONVERTED, OR IS IT ALL SEMANTICS

The World Health Organization states that synthesis from one cannabinoid to another is illegal. Igniting the question, what is the difference in the definition and use of the terms synthesis and converted? By definition, in Oxford, Synthesis means “the production of chemical compounds by reaction from simpler materials.” Convert is defined as “cause to change in form, character or function.” That should clear things right up, right? Not so fast.

Swider is clear in stating that he is not an attorney. However, he also states that if one were to read the WHO paper discussing cannabinoid synthesis unless you are a chemist, you are likely to “get lost” in the verbiage. There is no “one” way to convert CBD to Delta-8. Swider indicates while there are more efficient and cleaner ways to encourage this cannabinoid production from its source, there is no way to do so with a 100% yield. Meaning that if the end result is 80% Delta-8, the other 20% is a variety of unknowns. Determining what those unknowns are, if or how they can be cleaned from the Delta-8, resulting in a more pure product, can only be done with testing that can be validated. “You can’t just ignore the other 20%; it’s something”.

Quick to point out that “he is not against Delta-8, there are people out there doing it efficiently and right,” he simply has “serious questions and concerns about how it’s being produced.” Swider questions whether Delta-8 as a substance is being approached more from a bottom-line perspective than the consumer safety aspect. It takes due diligence on behalf of the consumer to look into the quality of the products available. Look for testing results. Are the testing sites real or dead ends? Attempt to contact the company and discuss the products. Also, is the lab that is publishing the results promoting the products? That could be an indication of a conflict of interest; ethics must be upheld over profit. If a lab stands to make money from suggestive sales of products that are more “pure,” shouldn’t those test results be called into question?

Josh firmly states that public safety is his biggest concern when it comes to the Delta-8 conversation. It is well known that Delta-8 does not appear in significant amounts naturally. It must be coerced from the plant. This means a “chemical process is undergone to create the desired compound.”

“Forcing reactions can cause unknown circumstances” unless the end product is tested; there is no way of knowing exactly what anomalous byproducts are being created. In the meantime, we have closet “chemists” using YouTube videos as tutorials on how to “convert” CBD or Delta-9 into the loophole-friendly Delta-8, making unvalidated claims in their test results.

COULD DELTA-8 BE THE NEXT VAPEGATE?

Thinking back to the not-so-distant past, we just endured a nationwide problem with Vitamin E acetate as an additive to THC vapes. Chemists have known for years that it should not be inhaled. Yet vape cartridges containing this unsafe ingredient were produced in homes and garages, then packaged and marketed as a safe product to the unsuspecting public through an illicit market.

Fast forward to today. If you were to take just a few minutes and google Delta-8, an alarming number of hype-words are associated with it. “Diet Weed,” “CBD on Crack,” “Marijuana Lite,” the list goes on. The appeal of a high that’s not federally illegal and doesn’t come with the paranoia and feelings of anxiety that many associate with Delta-9 THC is clear. So is the attention it is garnishing from lobbyists and politicians. From gas stations to shops that look like licensed dispensaries, many businesses are cashing in on the ambiguity, particularly in so-called cannabis deserts. With little regulation and no special licensing required, one has to wonder how much longer this Delta-8 craze will be exploited.

Tune in to the podcast to hear Josh discuss Infinite CAL’s stance after testing thousands of Delta-8 samples, ethical Delta-8 production, and what he sees for the coming year.